It was a quick decision which sprouted while surfing the Internet... I saw a 'pop up' of not missing a chance to travel to Europe at the cheapest possible price. Who says 'Social Media Marketing' doesn't pay off.

It did not take much convincing... The flight and hotel were booked and I was parking my car at 'Pearson' walking into the Terminal building, beelining towards 'Toronto's Duty Free'.

This trip to 'London' was well overdue as my last visit was over 22 Years ago and I have to say not much has changed. Buildings with their fabulous architecture are still in existence and the people are still friendly... and that what matters!

My hotel was in Central London and the commute was a bit of a trek from Gatwick, but I now had learned an additional route traveling from an airport to downtown London. Yes, all those years and numerous travel escapades to and from London, I never had the opportunity to traveling from Gatwick.  I can now scratch that off my 'New Things Learned' list.

The 'English' are all about the weather, but there were no complaints for the entire duration of my stay as the weather was extremely gorgeous... Bright sunshine, almost clear skies and temps around 18 Celsius.

'Corus Hotel Hyde Park' was as central as it gets in London. With the 'Underground' just a few blocks away, a bar or should I say 'PUB' just next door (with live music), it made for a convenient place to vacation.

The trip was rather short, but really enjoyable. Ok, maybe I could have used one more night... Oh well, there is always a next time.

Click here to view a few 'touristy pictures' captured on the trip!

I also have these images in a 'Slide Show' on YouTube. If your device supports it, watch in 4K... 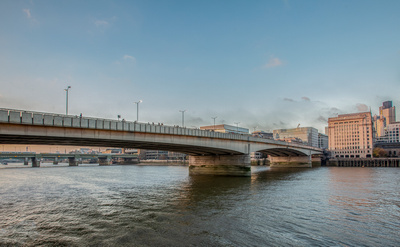